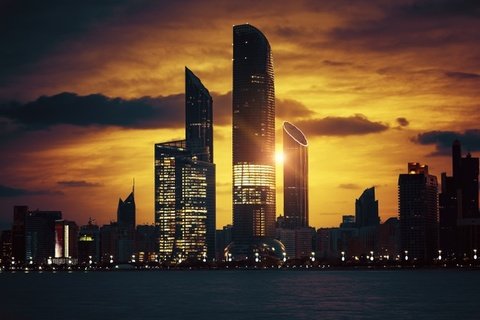 Though Abu Dhabi's cityscape does not reach the heights of its neighbour, Dubai, it has significantly grown taller over the past 50 years.

UAE is an absolute feast for modern architecture fans. Barely a month passes without another new glistening skyscraper springing up in Dubai or Abu Dhabi.

But some residents remember a time when it was not like this, when the view of the sky was largely uninterrupted and the glowing light from the sunset beamed across the low-level city dwellings.

Though Abu Dhabi's cityscape does not reach the heights of its neighbour, Dubai, it has significantly grown taller over the past 50 years.

The 10-floor Hilton Abu Dhabi was the tallest building on the Corniche when it was opened by Sheikh Zayed on May 23, 1973. Now the Radisson Blu, it is dwarfed by new towers on both sides.

It was another hotel that took the city to new heights – the Novotel Centre Hotel that opened in 1976. It remained the highest building in Abu Dhabi for 14 years until the massive Silver Tower was built on the Corniche in 1990.

Tall towers in the capital continued to concentrate mainly in the city centre for the next 20 years.

Baynunah Tower known for its blue-glass facade and white piping housed a Hilton hotel. It is actually three towers in one and at the time of its completion in 1994 was the tallest in the region.

In 2002 the NBAD headquarters was built just off the Corniche on Khalifa Street and then came the 185-metre Abu Dhabi Investment Authority Tower in 2006.

Starting from 2012, much of the focus for tall buildings in the capital turned to Reem Island. The Sun & Sky Towers development took the city's construction to new levels. 292 metres high Sky Tower is still the tallest building on the island and Addax Tower, which is 282 metres high, is located close by.

However, Sky Tower topped the list of the capital's tallest towers for just a short while. The Landmark Tower opened on the Corniche in 2011 and then Burj Mohammed bin Rashid opened in 2014. It is the tallest building in Abu Dhabi at the moment and fifth tallest in UAE.